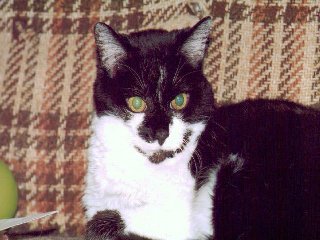 Monroe K. Katt (he never told me what the K. stood for) was born in July, 1982 and was still a feisty kitty until just before his death September 27, 1999. For 17 years, Monroe was David's feline companion.

Monroe was a life-long computer expert and the retired Director of the FBI (Feline Bureau of Investigation).

Monroe celebrated his 17th birthday with a quiet family dinner at his remote mountain getaway. He received many notes and telegrams of congratulations from former colleagues and other well-wishers from around the world. Since it was a private gathering, no photographers were invited.

Monroe became involved in computers at an early age. As a 3-month old kitten, Monroe acted as Supervisor and Quality Control Engineer while David put together a Heathkit H-89 computer.

Monroe was instrumental in the development of CatNet and CatChat, the network used by computer-literate kitties around the world to communicate with each other.

Monroe also developed an early interest in law enforcement. Monroe's computer and law enforcement skills fueled his meteoric rise within the ranks of the Feline Bureau of Investigation. He received nationwide acclaim after setting up the highly advanced computerized crime lab for the Bureau. He was named FBI Director during the last months of the Bush Presidency. He retired in mid-1996 and was working on his memoirs when he died, September 27, 1999.  It was exactly 17 years ago to the day that Monroe selected David as his human companion.

Monroe K. Katt was the retired director of the Feline Bureau of Investigation (henceforth referred to as the FBI). He was one of the original "Quantico Kittens." Monroe has worked on a number of high-profile cases but his involvement in most of them remains classified for reasons of national security.

Monroe was an asymmetric black and white cat. Black and white cats are sometimes referred to as "tuxedo cats". Monroe developed an identification method for converting the black and white markings of tuxedo cats to binary equations. A special computerized scanning process reduces each black and white cat's image to a series of pixels, encoded to produce a unique ID number. The American Cat Fanciers Association gave Monroe their highest honor for solving the case of the "Fraudulent Felines," a criminal organization consisting of a pack of dogs dressed in cat suits.

Monroe's interest in the binary sciences naturally began at a very early age, even before he was sworn in as an FBI agent. He, not Al Gore, created the Internet as an outgrowth of his work on CatChat. CatChat allows cats all over the world to communicate with each other via computer. CatChat resides in memory as an executable module hidden from the casual user. If a cat resides in your home and you have a computer, rest assured, CatChat is running on your machine. Monroe taught his human almost everything he knows about computers, but not everything Monroe knew about computers. Monroe forgot more about computers than most humans will ever know.

The National Organization of Feline Law Enforcement Agents (NOFLEAS) was founded by Monroe soon after he realized that Bloodhounds have their own association.